What’s brewing for BC and the Canadian retirement landscape.

New Report to Members highlights the plan’s performance in 2016

Municipal Pension Plan’s 2016 Report to Members is now available and it features the latest financial update about the plan.

The most recent valuation determined the plan to be 104.6 per cent funded on a going concern basis. The 2016 Report to Members reveals the plan remains fully funded and healthy despite a challenging environment of low interest rates and muted economic growth over the last year. The plan earned investment returns of 5.9 per cent on an annual basis (below the benchmark of 6.6 per cent) but more importantly over the past five years the plan has earned an annualized rate of return of 10.2 per cent. This is good news, because it means the plan is meeting its long-term financial objectives.

The report also highlights actions trustees took over the past year to ensure the value and sustainability of the plan. These include:

Trustees’ proactive and prudent management of the plan, along with BCI’s investment expertise, helped the plan’s assets grow to $46.4 billion in 2016. Municipal Pension Plan remains the largest public sector pension plan in BC, and the sixth largest in Canada. It’s an example of a well-governed, cost-efficient and sustainable public sector defined benefit pension plan.

Are you a plan member?

2016 Report to Members also includes some answers to common questions you may have about your pension. Events in your personal life and your career affect your pension, so I encourage you to check out this information today.

Looking for the latest financial statements?

Check back in early August when the 2016 Annual Report is released.

Is there something you would like to know more about? Suggest a blog topic to me on Twitter: @MyBCMPP

The views and opinions expressed in this blog are those of the author and do not necessarily reflect the official policy or position of the Municipal Pension Board of Trustees. 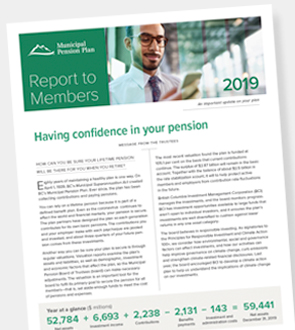 2019 Report to Members is now available

Judy Payne is the Executive Director
of the Municipal Pension Plan